The Culture of Soccer in Argentina

When considering the culture of any country, what do you look at? The main points are usually visual arts, popular culture, values, sports, and cuisine. In Argentina, association football (soccer/ football) wins on the popularity aspect. Interestingly, though, it is not the official national sport in the country. Rather, it is a game called pato which features aspects of both polo and basketball. It’s also an interesting game with a rich history behind it that’s worth a second glance. But for today, we focus on football which has warmed its way into Argentinian hearts.

How about we delve deeper into this game’s roots in Argentinian culture?

The Introduction of Football in Argentina

British citizens living in Argentina back in the late 19th century are credited for introducing this widely received game. At the time, three other football leagues existed (Great British, Scottish, and English). That would make the Argentinian league the fourth of its kind, etching a place for it in history books. First accounts of the original football matches in Argentina are a tad hazy. The records cannot seem to agree on what happened, and it takes a lot of piecing to get the whole picture. The story goes that back in 1867, the British had a playoff with eight players on each side. The gameplay was a mix of association and rugby football. Some records even imitate that the use of hands was permitted in the game. With a score of 4-0, this game set the ball rolling for future games.

In 1880, a similar game took place, this time between the British and an Uruguay-Argentinian team. Football had now garnered some interest among the locals, and at least 1,000 people showed up to witness the match. Records show that the game was still in its formative stages, and the gameplay was not quite clear. Some even state that there were 15 players on each side. What was the actual case? We may never know. But we can agree that football at the time, while organized, was still in the process of being honed into the fine sport it is today.

The Formation of Leagues

As football became popular within Argentina, Alexander Watson saw it fit to organize the teams into leagues. He thus started the Association Argentine Football League in 1891. It has five clubs which competed against each other for the top position. Unfortunately, after one season, the league died down. But the idea did not die with it. By this time, other British citizens had also taken up an interest in the sport and set up separate teams. They thus figured that starting a league would enable them to make the game even more exciting. In 1893, the Argentine Football Association came to be. It comprised teams with British players, some of which are existent to date. Examples include Rosario Central and Quilmes.

With the league in place, more teams started cropping up, leading to the spread of the football craze. By the start of the 20th century, European immigrants in Argentina had also taken to it and played it a lot. Unfortunately, the local creole population was not given opportunities to join the football clubs. Most of the clubs had policies that only allowed the admittance of European immigrants. The creoles decided to take matters into their own hands and formed clubs that allowed locals to play. In 1899, Argentino de Quilmes was formed, paving the way for many such others. In the years that followed, Argentinians formed clubs that bore the names Argentino or Argentinos, a tribute to their heritage.

With the football clubs spreading through the country fast, it was only a matter of time before the world paid attention to this football hub. By 1904, European clubs had started making visits to the South American region. Southampton and Chelsea are two of the big names that graced the region in the early 20th century. You might wonder why the teams were heading to Argentina. At the time, the British teams had some of the best skill sets globally and were an inspiration to budding footballers. Of course, this increasing interest sparked more interest in forming football clubs. By 1907, Argentina was home to 300 teams!

It became necessary to have a central point at which all the teams could play against each other. The arrangements led to the consolidation of the Argentine Football Association, which now boasts 326 football clubs. These fall under seven leagues which makes matches much more manageable. Of course, to get here, the leagues went through numerous changes in playoff formats. 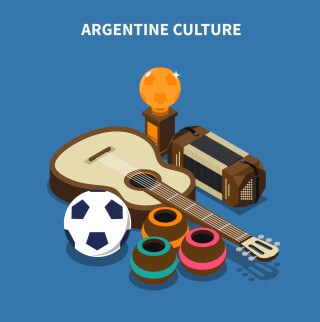 Every country has a sport in which it excels, and for Argentina, this is football. Most Argentinians can connect when it comes to their love for football. Think about it. If more than 2.7 million people play the game, how many supporters can it have? Many! Some attend the matches live and dress up for it, ready to watch their favorite teams win. Those who do not watch the matches live follow the action on television. Or catch up with their friends and colleagues about the games. It’s quite normal to come across people in deep conversations about their favorite teams.

Does it have a hold on its supporters? Let’s use a visual. Most people remain glued to their phones and TVs during World Cup matches, catching the action live. But have you ever noticed a change in their patterns or walked into a restaurant and found it deserted? Well, Argentinians do not play when it comes to supporting their favorite teams. They go all out, and during international matches, it’s common to find deserted streets. People will be home watching the matches and hoping that Argentina does well.

You would enjoy watching Argentinians celebrating on the streets when they emerge the winners. In 1978 and 1986, the Argentinian team won! The streets were full of people dancing and cheering, not believing their luck! Of course, a country with such deep connections with the game would have a higher chance of winning. During those celebrations, anybody who was in Argentina must have felt the excitement in the air and can probably recall it to date. In 1986, everyone was aware that Diego Maradona was a star, a legend that would change the football scene. Even now, decades later, his star still shines, and many footballers aspire to live up to even half the footballer he was.

The support shown in Argentinian football matches is not passive. Instead, the fans lean on aguante, which encourages endurance, courage, and fearlessness. So, throughout the match, they encourage the players by being active throughout the gameplay. They chant and jump on the stands, creating energy that reverberates throughout the stadium. They also believe in standing up to the opposition, and no matter how aggressive the opposition gets, they will stand their ground. It gets even more interesting because those attending matches are classified under fans, militant fans, and spectators. The militant fans attend all the matches regardless of the circumstances as a show of their endurance. Fans also attend most of the matches but not all like the militant fans. As you may have guessed, spectators are not that connected to the values of the aguante.

The militant fans often carry bells and tambourines to the stadiums to stir up excitement among the fans. By engaging in song and dance and keeping the tempo high, the fans can withstand long periods of chanting and jumping. However, this behavior has been seen to cause some unruliness among some fans, which led to the banning of Argentinian fans from away matches. Some riots have also been seen over the years when fans are unhappy with the match results.

The rivalries in Argentinian football are ones for the books. Take the Superderby as an example where the Boca Juniors and the River Plate teams go at it. Their rivalry is so intense that it features on the international scene. When the two teams play each other, the support shown on either side is so huge that it makes other international teams’ fanbases look like an ordinary thing. Another rivalry that brings Argentina to a halt is the Avellaneda derby which comprises the Racing and Independiente teams.

Overall, watching a football match in Argentina, more so between local teams, is a once-in-a-lifetime opportunity. Doing so would enable you to be immersed in the beautiful soccer culture in this country of the football greats. Standing among fans who have idolized Maradona and continue to cheer on their own like Messi would be quite a thrilling experience.

If you liked this article, you can also read Betting on Gymnastics: how and where to find the best odds.